And soo it goes….. Joey messaged me during our many AIM sessions and asked f he can take me on a long ago promised hike. Our next day off was March 28, 2007, so we set the date. On March 28th, Joey drove up to my  house and picked me up with a plan and map in hand (till this day always prepared). Then we started our epic hike. Very early on as we walked up to Inspiration Point, my heart was beating fast and I had butterflies like no other. Joey stopped, took my hand and embraced me, then pulled me closer and there the first kiss took place. Amidst the next 8 hours we get lost, ran into a beehive, barely avoided a skunk, and walked through a knee deep creek, but through each obstacle having Joey by my side made the difficulty fade and made for an everlasting memory. At one point we were so lost we just sat down in the dense brush and hung out, almost forgetting the fact we were lost. 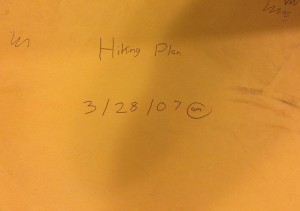 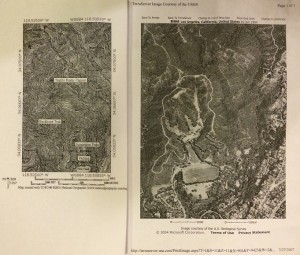 Neither of us knew where the relationship would go, but one thing was true, that this hike would live in our memories for a long time. Joey in fact went home and posted about the experience. Read the post below: Original Post

An amazing hike. Myself and a dear friend 😉 went through this trail yesterday. We passed the bridge then completely missed the downward path into Rustic Canyon. When we reached a dead-end (and after having a skunk scurry past us, nearly spraying :P) we started to backtrack with the intent on heading out and calling the path down to rustic a lost cause, we found the very unmarked path. It looked more like a rain gully than a path. Once about 3/4 down the path, and after mentioning how difficult it would be to go back out through this path being as how steep it was, we ran into our first shocker for the day. Hanging from a tree practically on the path it self was a very active bee hive. We suited up, shirts pulled up, hats on, and slowly walked through the swarm of bees.

Once at the bottom we found the creek bed, as well as an abandoned house now fenced up. We headed left with the intent on visiting Camp Josepho. A short hike from here and we had arrived. The camp seemed to be in the midst of a renovation whilst still having a very eerie recently/hastily abandoned feeling to it. We found to do lists on white boards, open garages with tons of supplies and other valuables completely exposed but not a soul on the property. We also found two very beautiful deer hanging around the archery yard. From here, we debated which way to go. Was the fire road near Josepho our best choice or should we back track and head to the right at the path we originally dropped into the creek at? We decided to backtrack, following the instructions here. We assumed the way out would be fairly well defined. This is where the true adventure began. The trail is all but gone (or we’re blind), it seemed that where the trail would have been we found a very thick overgrown low growing bush had taken over, this wouldn’t be so bad but whatever this bush is it’s EXTREMELY spiky. So, going through what seemed to previously have been a trail was out of the question without enduring much pain on the way. The path started out okay. The creek was dry for the most part and where it was wet it was only mildly. Once we got deeper in, the trail still all but gone, it started to get deeper. We were getting into areas that were easily ankle deep. We continued to trudge through with the assertion that it simply must break through at some point to an exit. After all, that’s what the brief description here seemed to imply ;). So we continued pushing through until we hit the waterfall. We paused to reconsider our options at the waterfall. We had rope with us so worst case, we could go over. But thankfully having read through the comments here we noted a path both to the right and the left. Being that the right seemed to be the lesser of two evils, we went that way. With what was an obviously defined trail we made quick work of the waterfall and were at the bottom. At this point both myself and my partner were growing weary of the length of time that we had been rock skipping through without seeing any way out or any signs that the creek would exit to anything. Just a bit past the falls we found a very steep and very long exit out of the canyon. While probably the most grueling portion of the days hike whether due to exhaustion or simply the sheer amount of upward climbing we had to do to get out of the canyon, the climb up was certainly a raising of spirits.

Once out and back on top, we were able to gauge better where exactly we were. We still had a good amount of hiking to do in order to get back to the parking lot. We’d get occasional glimpses through the thick brush and try to figure/hope which direction the particular trail would take us, and continue on. For the most part there didn’t seem to be any forks that would afford us any other choices anyway, aside of course from heading back down to the canyon and neither of us wanted to pay the canyon another visit. After trudging forward a good bit, we caught glimpse of the bridge we had originally crossed and knew we were finally getting close to an exit, though the bridge was now higher than us and on what seemed to be a complete other hillside. It was like a wacky game of whack a mole with us being the moles popping out in different places throughout the hills. Trudging on, we made our way and finally started seeing people again. Bikers and fellow hikers abound! We were back where we should be! Hoozah! We hit the entrance to the backbone trail that we had originally started on, went back through inspiration point and down to the polo field and our never before so welcoming car.

All that said, this was one of the best hikes I’ve ever taken. The eeriness of the canyon, the complete disorientation both in direction but time as well caused by the tree cover, the fact that both myself and my partner distinctly heard people trudging through leaves, talking, glass bottles clinking in what sounded like just a few yards ahead of us, and yet having not seen anyone at all in the canyon the whole day all added to the mysticism of the whole event. It truly was an amazing experience. While I’m not particularly in a rush to go back down and get lost completely again, I will be back. I think you’d be hard pressed to find such an amazing hike anywhere in the LA area. I would recommend this hike to anyone looking for adventure, whom is up to a fairly grueling hike at times.

Wedding Countdown
Manage Cookie Consent
To provide the best experiences, we use technologies like cookies to store and/or access device information. Consenting to these technologies will allow us to process data such as browsing behavior or unique IDs on this site. Not consenting or withdrawing consent, may adversely affect certain features and functions.
Manage options Manage services Manage vendors Read more about these purposes
View preferences
{title} {title} {title}