Joey had been planning the details of the engagement for a few months. A couple weeks prior to our 7 year dating anniversary Joey had mentioned that he would take me back to Inspiration Point (that’s where he was originally going to propose). Sooo during that week, I  mentioned to my best friend Olya that this felt like it would be the moment. But during the week, Joey’s sister, Talia, sent a text message on a whim to purchase a living social deal for a sky dive. It just so happened that there were openings that week on Saturday March 29th. I bickered with Joey a little because we were supposed to go hiking, but we agreed that the anniversary hike can wait. So the sky dive was on. Not thinking much of the last minute change of plans and still looking forward to a future anniversary hike, I  was fooled.  Little did I know the amount of work that went into this day. The whole family awaited at the landing zone. Talia and Kevin jumped first. They landed and pulled out the roses, champagne, and the industrial letters that spelled out: “Karina will you Marry Me?” I jumped last last and within 1 minute of jumping out of the plane and into the sunset the teacher took our our parachute and spiraled me  over the landing zone. I looked down and saw the letters and pretty much freaked out in the air. The landing couldn’t happen fast enough. It was the most joyful moment ever, I was shaking, crying, laughing, and yelling all at the same time. 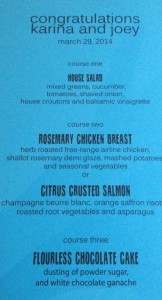 Wedding Countdown
Manage Cookie Consent
To provide the best experiences, we use technologies like cookies to store and/or access device information. Consenting to these technologies will allow us to process data such as browsing behavior or unique IDs on this site. Not consenting or withdrawing consent, may adversely affect certain features and functions.
Manage options Manage services Manage vendors Read more about these purposes
View preferences
{title} {title} {title}